Lakeview is one of many neighborhoods of New Orleans. Bordered by Robert E. Lee Boulevard, Orleans Avenue, Florida Boulevard, Canal Boulevard, and Pontchartrain Boulevard it was historically maintained by an order of priests known as the Capuchins. During the Spanish rule, the Capuchins surrendered the land to Don Almonester y Roxas, who is celebrated for rebuilding the St. Louis Cathedral and whose daughter built the majestic Pontalba Apartments around Jackson Square. Consisting mainly of two parks, New Basin Canal and City, this previously undeveloped swampy expanse was transformed in the early 19th century after the establishment of the New Basin Canal. Lakeview was one of the first neighbourhoods to seize the opportunity for beauty and leisure existing around Lake Pontchatrain and the 1500-acre City Park.

Katrina caused 85% of the city to be under water for 10 weeks. This created difficult circumstances for the people to come home. With no jobs, fighting insurance companies and trying to find honorable contractors and temporary housing this was a daunting task. Lakeview had 10' of water from Katrina which devastated the area for years. This led CVU to target Lakeview first in order to help the neighborhood rebuild. Mid-City was next which is adjacent to the Lakefront and also had major flooding and on it went.

In March of 2009 CVU met with Councilmember Susan Guidry to get the first art box started. Susan loved the idea and championed the CVU art box project. CVU then met with Lakeview Civic Improvement Association (LCIA) to get permission to do boxes in Lakeview. A member of LCIA (Al Petrie) was assigned to assist with art approval along with CVU arts committee, Doug Mayo, Gene Meneray and Emily Leitzinger.

CVU instituted a sign up program on the website www.cvunola.org for all artists. Artists are notified by email with a brief when a box becomes available. The renderings are sent to the committee blind (they never know who the artist is until after completion) so is a very fair process. The artists are furnished with all supplies and paid a stipend for their work.

CVU now has work in over 3 parishes (165 boxes completed) and 18 neighborhoods including: Lakeview/Lakefront, Mid-City, Bio-Medical District, Uptown, Carrollton, Gert Town, Central City, Claiborne Corridor, Gentilly, Broadmoor, New Orleans East, Downtown,7th ward, St. Roch, Marigny, Algiers, Metairie and St. Bernard. CVU raised over $100,000.00 in donations to pay artists and to furnish supplies. It is an ongoing project with over 1,000 boxes total. CVU hope to get enough funding to finish all by 2020. All the neighborhoods have sung our praises for how it has stopped graffiti and helped reduce litter. This creates economic development and creates a sense of pride in the neighborhood.

Check back soon
Once posts are published, you’ll see them here. 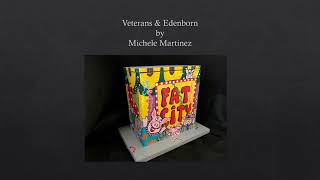 How Outdoor Art Changes a Neighborhood